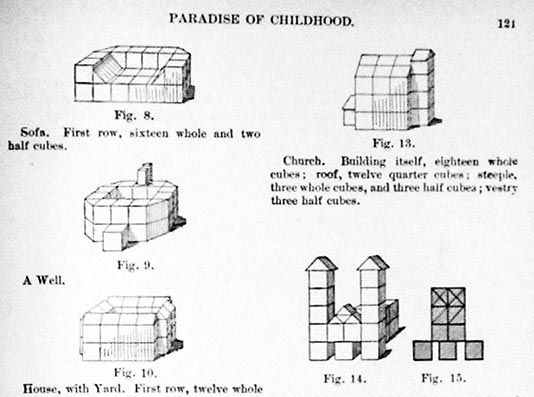 An Idea to Build Upon

Anker Steinbaukasten (Anchor Stone building sets) begins with an idea of German educator Friedrich Froebel. He laid the foundation for kindergarten and modern education realizing the value of liberal thinking and creativity. Froebel created a series of playthings for teaching and exploration. These "Froebel Gifts" included a building series of various size and shape wooden blocks which became know as "Froebel Blocks". The concept is that these playthings help to develop the tactile senses, manual dexterity and also stimulate imagination, creativity and 3D perception.

Brothers Otto and Gustav Lilienthal were inspired by the wooden blocks of Friedrich Froebel and developed a formula for manufacturing mineral based building bricks. Their formula consisted of a mixture of quartz sand, chalk and linseed oil. The alternative for the wooden Froebel blocks was significantly more stable because of the weight and precision surfaces of the stones. The first Anker Steinbaukasten has a pleasant, smooth, natural feel.

The creative ingenuity of the Lilienthal brothers was not accompanied with sales and marketing ability. They fell deeply in debt and were forced to sell their stone block formula to Adolf Richter, a wealthy businessman in Froebel's village of Rudolstadt. In 1880, Richter builds a factory for the manufacturing “Richter’s Anker Steinbaukasten” in Rudolstadt. At the same time an art institute is established where artists, illustrators and architects develop the building plans for the Anchor Stone building sets. The first worldwide building set system is born and distributed under the logo of a red squirrel. 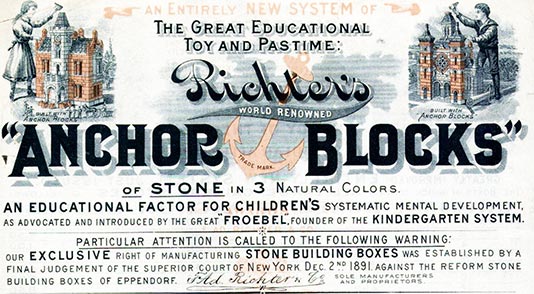 In 1884 Richter launches the first block series with four different stone building sets. They are displayed at various exhibitions and win numerous awards. In 1887 the first Special Edition set is released in honor of the 10-year papacy of Pope Leo XII: a huge true to scale model of the house where he was born.

Richter is one of the first in Germany to use large-scale colorful advertising and the poipularity of the product rises quickly. Before 1890, over 40,000 Anchor Stone Building Sets are produced and distributed under the Anchor logo. The Anchor Stone building sets become synonymous with creative, educationally valuable toys. Anchor Stones receive praise from many in high position; Thomas Edison and US President Grover Cleveland.

At the time of Richter’s death i n1910, the Anker Company is at its peak with branches all over Europe and the United States. There are 649 workers employed at the main factory in Rudolstadt, Germany. 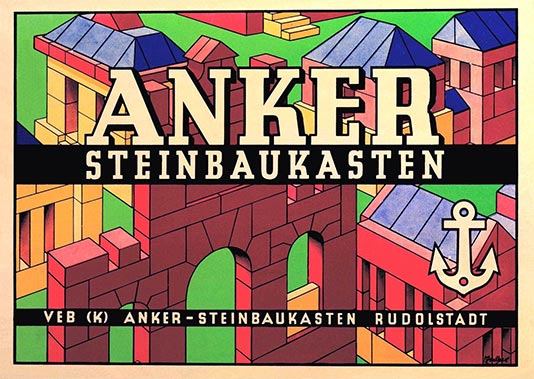 After long years of leadership without Richter, inflation after World War I leads to the loss of the entire. In 1921 the company is fundamentally re-organized and divided into two state-controlled stock corporations. Over time, the company in Rudolstadt is turned into a people-owned enterprise by the government of the German Democratic Republic.

Running Out of Steam in the GDR

Anker Steinbaukasten survived two wold wars without severe damage, but in 1963 the German Democratic Republic government stops the stone production. The company is closed and manufacturing plants are given away. With the exception of a very few complete building sets, all the stones are handed over for free to whoever can carry them away. According to estimates about 5 billion Anker Stones were sold in four hundred different sets from 1880 to 1963. 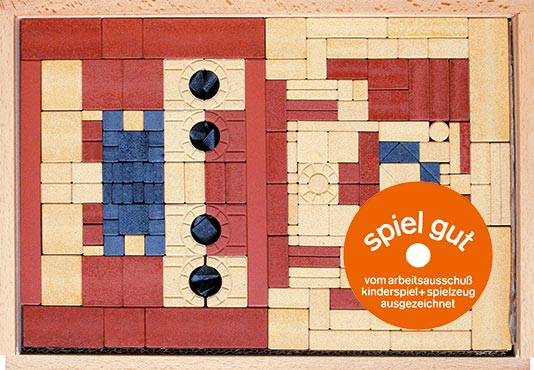 The Anchor Stone has fascinated and inspired several generations and even today hasn’t lost any of its charm. Thanks to a notably persistent group of Anchor Stone friends the building sets are back. It was Anchor Stone lover Georg Plenge, a professor of acoustics at the Technical University in Berlin, who started the Anchor Stone renaissance project. With the support of EU aid money and Thuringia, manufacturing is started again in 1995 with the original manuals. Anchor Stone is re-introduced to the market with box #6 and shortly thereafter with extension boxes 6A and 8A.

Since rebirth, Anchor Stones have won numerous awards including the “Spiel Gut” Seal, the “Parents’ Choice Award” and the “National Parents Publisher Award”. In 2005 the Anchor Stone building sets celebrated their 125th birthday and the 10th anniversary of the resumption of significant production. In February 2008, Anchor Stone presents its new visual appearance at the 59th International Toy Fair in Nuremberg.

On May 25, 2009, Anker Steinbaukasten was purchased and becomes a subsidiary of Gollnest & Kiesel - a German toy company based near Hamburg. For nearly 10 years, Gollnest & Kiesel continues the traditional manufacturing in Rudolstadt and attempts to broaden the market for the stone blocks by providing more exposure and introducing a junior line with primary colors.

Ownership Back in Rudolstadt

In June of 2017, Gollnest & Kiesel sells Anker Steinbaukasten to the workers' welfare association AWO Rudolstadt and the company is known as Ankerstein GmbH. The town of Rudolstadt is happy to save the company and continue the tradition of the company started more than 100 years before.